A couple of weeks back I burned an evening dreaming about a greenhouse; tapping through the internet, gazing at photos.

I like the idea of being completely independent. Free to do whatever I darn well please, not necessarily dependent on the whims of utilities, grocery stores…pretty much everyone, save whoever makes toilet paper. The allure of a greenhouse to me is, theoretically, I can grow all kinds of things year round. I wouldn’t have to buy veggies or fruits, except for whatever I didn’t grow myself. Now the reality is I would never do that. I’m too lazy and lack fundamentals necessities such as knowledge, money and time. But reality never stops day dreams.

Last year I said we are never growing plants from seeds again.  The seed trays on the window sills just attracted bad cats, who’s inquisitiveness meant damage plants, dirt and water everywhere. The whole thing was a mess; more trouble than it was worth.

So this year of course I couldn’t resist the urge to pick up an indoor little greenhouse. My former “no more plants from seeds” edict conveniently missing from memory (as reminded by my wife). As I mentioned in previous posts, it impossible for me to visit Lowe’s in late winter, early spring and not walk out with an arm full of stuff that I may or may not need. This week I walked out with a $35 indoor “greenhouse”, which is basically a backers rack with a vinyl cover.

We (my kid and I) set it up in about 15 minutes, in my studio. I didn’t feel like putting soil into pots out in the garage (too cold) so I brought all of my planting supplies into the studio and set to starting seeds. We (now consisting of myself and two kids) filled several trays with soil and little seeds. Trays were then placed on the racks, and the cover zipped shut. All that’s left to do is water and wait. Once the seeds sprout, we’ll thin them out and start toughening them up: moving the greenhouse to a sunny spot. Right now, in my studio, they only get indirect sunlight.

By the way, the seeds I picked up are organic ones from a nifty display I saw at Lowe’s. It’s important to get organic seeds so that they don’t contain neonicotinoids which are a type of insecticide that kills honey bees and other pollinators.

It was fun to set up the little greenhouse and plant seeds.

In addition to pining for a “real” greenhouse, there’s a part of me that really wants animals too. I really want my very own micro farm really. Not sure who would watch this farm when we’re out traveling with our trailer for weeks at a time, but we can figure that out. But, who lets reality get in the way of day dreams, right?

Well we already have bees, and we’ve survived raising those, so there is a precedent for some semblance of competence. I think we can handle guinea fowl next. We can at least try 2-4 of them and see how it goes. The sole reason we’d get those is to see if they control the tick population, which is rampant on our little piece of paradise.

But beyond a few birds I’m thinking even bigger. I think it’d be neat to have a couple of goats and sheep. I’d love to have a little animal house, with an adjacent greenhouse and coop. Little animals roaming around, grazing…doing their thing. Cheese, wool, milk….

Who knows. Anything is possible.

The little $35 greenhouse I picked up at Lowe’s. 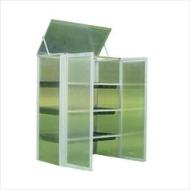 A simple balcony greenhouse. I like the look of this one. $150 from BuildDirect.com

A small $300 greenhouse from Harbor Frieght.

A simple wood look greenhouse from BC Greenhouses.

This is what we’re growing from seeds this year. All are organic seeds.

I set up in my studio because it’s still too cold to work outside in the garage.

Look! There’s a chicken coop right on the cover.

This could be the year for guinea fowl. While we’re at it, chickens could be fun too.

I’ve been wondering what our pH levels are at various location in the yard, so I picked up this tester. I’ll give it a try. $10 at Lowe’s.

My wishful thinking sketch of what a little barn and greenhouse could look like in the backyard adjacent the existing garden.

I’m even finding time to paint in the studio when I’m not starting seeds.