Our cable company, Spectrum, recently notified us that going forward we need to get a special digital box for any televisions that simply connect to the cable outlet instead of through a DVR or cable box. Basically the cable signal needs to travel through something like a DVR or receiver to make it all digital or unscrambled or whatever before it reaches your TV. I don’t know why watching television has to be so complicated but it’s not surprising that once again I need to do something that involves another device just to watch cooking shows on TV. And of course that device will eventually require a monthly fee after a free year. Well, whatever. Our family has five televisions total and we regularly only watch one of them, the TV in the family room. Soon though I’m going to get new televisions in the family room and basement, as both of those TV’s are over ten years old. So I could use this digital box thing in the basement I suppose or maybe in my studio.

The allure of a free digital box had me driving to my local Spectrum store to pick one up and get some questions answered on a Saturday afternoon.

Recently Spectrum jacked up our monthly bill to $190 a month for cable, internet and home phone. I not only wanted to find out more about this digital box, I wanted to discuss ways to save money on my cable bill.

DVR vs. Digital Box vs. Cable Card vs….

I’ll preface this with what my plan is. I’m going to take the family room television and move it downstairs. The HDMI port is broken on it and it causes the TV to flicker. I asked a guy at Best Buy a while back and he said that if a TV is over five years old no one really fixes them anymore and they don’t make parts for them.

So, my current ten year old Sony TV in the family room (the “broken” one) has a slot in the back for a cable card. Which got me thinking instead of a digital box couldn’t I simply get a cable card and pop it in the back? Then I wouldn’t need the new digital box in the basement. I asked the guy at Spectrum and yes theoretically that sounds right but they don’t carry cable cards in store. I would have to call their 800-number and see if I could get a cable card. Weird, but whatever. I confirmed at Best Buy later in the day that the new Sony’s have a cable card slot. So if I can get my hands on cable cards I won’t need to rent the digital box for $12 a month next year.

This is where is starts to get really weird. The Spectrum guy said if I get a Roku for my television, I won’t need the digital box or cable card, I will be able to stream my cable from the Spectrum app. Ugh, what the heck is a Roku and what does it do do for me? I’d find out later in the day at Best Buy. Basically it’s a device that I would buy for $50-$75 dollars and I would avoid the digital box rental fee. Roku also allows me to access various streaming television apps, but get this, both Sony televisions I’m looking to buy are “smart” TV’s which have all the popular apps built in. So the only reason, for me, to get Roku is to access Spectrum without a cable card, DVR or box. Ok, I’ll consider it.

This leads me to the “wild west” of accessing television content that we are living in in right now. It’s not like the old days where you plugged in cable and watched what they gave you to watch. With antennae, cable, and smart TV apps I need a spreadsheet, or a few websites, to keep track of where to watch what I want to watch.

Wouldn’t you know it, as I’m writing this (over the course of what was a couple days, and now a couple weeks) some interesting things have come to my attention. Here I was learning about Roku, lo and behold my parents of all people had already implemented my “Roku in place of cable box” plan with the help of my brother. I took the family over to my parents house for dinner and they had a Roku remote next to the TV. They explained it all to me and I got to check it out first hand. With that knowledge I went ahead and ordered a Roku Streaming Stick + from Amazon (on sale during cyber week). The stick can be easily switched from TV to TV in our household and should cover us as we rarely have more than one or two TV’s on at any given time.

One other thing transpired while I have been lazily writing this post: we got a new television for the family room! Once again taking advantage of holiday sales season, I went to Best Buy and bought a 55″ Sony 900E. I originally wanted a 49″ but my wife and the guy at Best Buy convinced me 55″ was the size to get based on the size of our room. Apparently the latest train of thought is you can get a larger television and not have it feel overwhelming. As for the model, I was the guy who decided to get the 900 series instead of the 800 series. My logic being that I hope to hold on to this TV for 10+ years, and the 900 does everything extremely well. The extra $200 would be a distant memory 5-10 years from now.

The Sony is a smart TV so it has a ton of apps built in including Netflix and Amazon, so I no longer have to go through the Xbox to access those. The TV also has apps like SlingTV, Hallmark and others so if I want to cut the cable I don’t need to fuss with even a Roku for that set. The 900E was relatively easy to set up. It has voice control so I can say “Hey Google, turn on Captain America” and the TV will show me when that movie plays next or may even turn it on for me if it’s available to stream.

I love the look of the set, and the picture is fantastic. There was some disturbing “soap opera” effect while watching 4K content on Netflix but with some setting adjustments I was able to get the picture looking for warm and personal versus jittery and too “good”. I love how the set is connected to my streaming apps and the internet. I love how it is basically a free Google personal assistant. The only thing we’re thinking of upgrading is the sound by virtue of getting a sound bar at a later date. DVD movies and video games look great on the set too, by the way.

One other note, I got three new HDMI cables to hook my DVD player, Xbox 360 and cable box up. The kids at Best Buy convinced me I needed 4K cables, which is fine. The problem is I found the same certified cables, in the 6′ size I wanted for $12 at Walmart instead of $25 at Best Buy. Point is, don’t buy your HDMI cables at Best Buy. You only need spend $9-$12 on HDMI 4K cables.

I’m so excited we got a new TV and my Roku should be here soon. I think we are set (pun intended) for the foreseeable future. I got a new modem (Netgear C700 on sale) so that will take $10 off my cable bill. We are going to experiment with the various apps. I really think my goal will be to cut the cable and just pay for internet, and any specialty apps like the Hallmark one for instance. With our busy schedule we’re not even DVRing shows that much because we know we can find them on demand.

Anyway, I hope my miscellaneous ramblings have helped those of you who may have been as lost as I was.

Do you have any pros and cons that you’ve experienced in regards to cable, streaming, etc? Share your thoughts and stories in the comments. 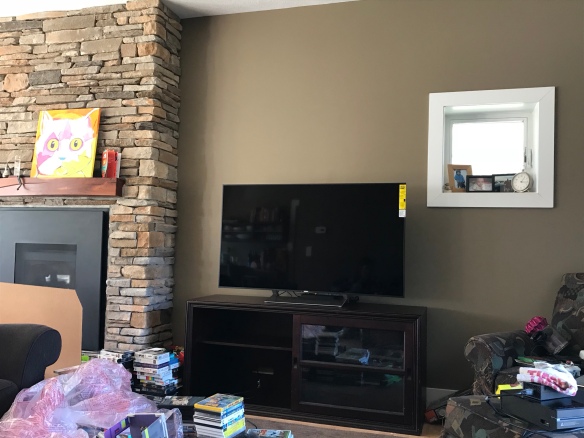 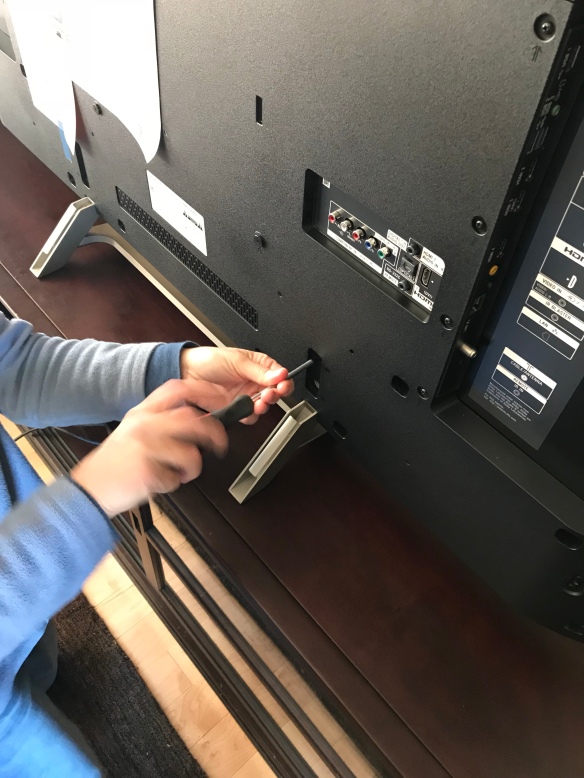 For now we decided to mount the TV on its stand. We may wall mount it at a later date but honestly we don’t want the TV to be to high off the ground. We like it at sitting eye level. 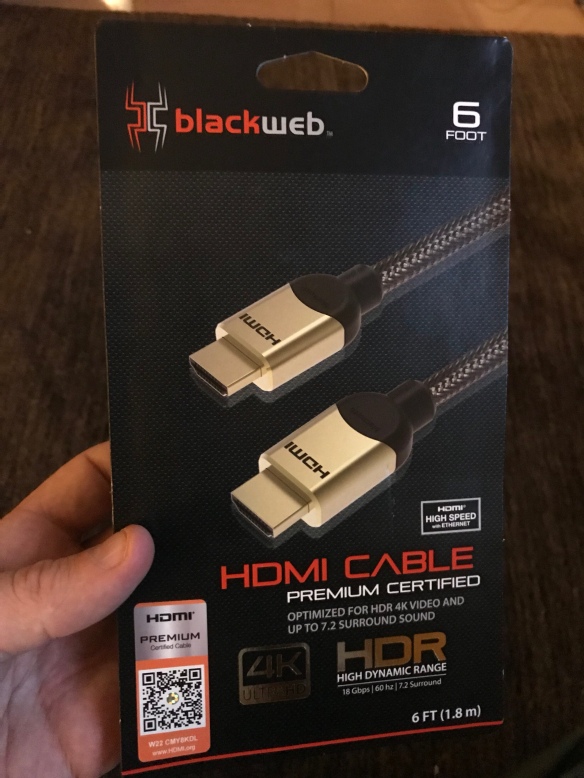 These HDMI cords were just $12 at Walmart and perform the same as the ones you get at Best Buy for 2-3 times the cost. 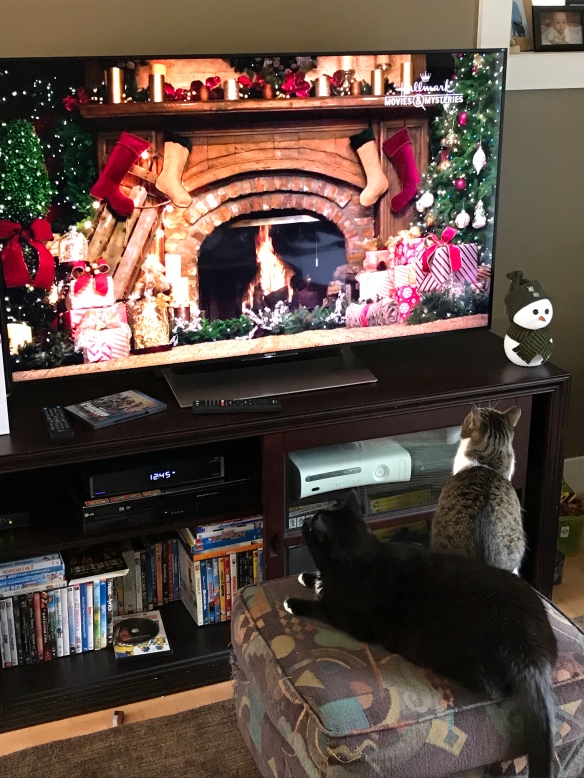 The cats enjoying Happy Yule Log on the new TV